After a number of delays, Intel has launched its fourth-generation Intel Xeon Scalable processor, codenamed Sapphire Rapids, the successor to Ice Lake. Manufactured on the Intel 7 node (formerly known as 10nm) and sporting up to 60 Golden Cove cores per processor plus new dedicated accelerator cores, the platform offers a 1.53x average performance gain over the prior generation and a 2.9x average performance per watt efficiency improvement for targeted workloads using the new accelerators, according to Intel.

At a press event in Hillsboro, Oregon, last month, Intel Senior Fellow Ronak Singhal referenced the wide span of SKUs, saying: “Customers will say you guys have too many SKUs, can you guys reduce the number of SKUs, but can you add these three SKUs that are really, really important? So we have this push and pull with our customers.” The 56-core 8480+ top-of-bin two-socket (non-HBM) part – with 40% more cores than its Ice Lake counterpart – achieved gen-over-gen performance uplifts across a number of benchmarks, delivering a 1.5x improvement on Stream Triad, a 1.4x improvement for HPL and a 1.6x improvement on HPCG. Intel testing across a dozen-plus real-world applications (including WRF, Black Scholes, Monte Carlo and OpenFoam) showed similar speedups, with the greatest gain for a physics workload, CosmoFlow (2.6x).

The Max series CPU is the first x86 processor with integrated High Bandwidth Memory. It offers a 3.7x gain in performance for memory-bound workloads, according to Intel, and requires 68 percent less energy than “deployed competitive systems.” On the AlphaFold2 application, the Xeon Max CPU showed a 3x speedup over the Ice Lake processor in Intel testing. Notable for HPC benchmark watchers, the Max series processor achieves a nearly 2.4x speedup on HPCG and a 3.5x speedup for Stream Triad, compared with the DDR-only Sapphire Rapids equivalent. The HBM in the Max series CPU offered no performance improvement for the High Performance Linpack benchmark.

The Max series “Ponte Vecchio” GPU, also launched today, contains over 100 billion transistors in a 47-tile package with up to 128 Xe HPC cores. Depending on the form factor, it supports up to 128GB HBM2e memory and delivers up to 52 peak FP64 teraflops. Combining the Max series GPU with the Max series CPU platform (in a three to one GPU:CPU ratio) offers a 12.9x performance boost for LAMMPS molecular dynamics workloads, compared with an Ice Lake platform without GPUs, according to benchmarking conducted by Intel. The addition of Max GPUs (six GPUs added to a 2-CPU server) translated into a 9.9x boost versus a Max series CPU-only platform for the same workload. The high bandwidth memory on the host CPUs enabled a 1.55x performance improvement compared to using DDR5 only. 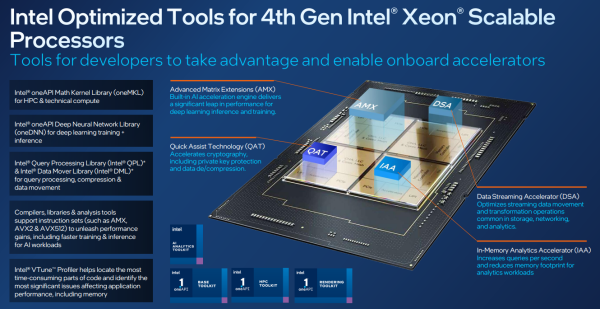 With a new service called Intel On Demand (formerly referred to as software-defined silicon, SDSi) customers will have the option to have some of these accelerators turned on or upgraded post purchase. “On Demand will give end customers the flexibility to choose fully featured premium SKUs or the opportunity to add features at any time throughout the lifecycle of the Xeon processor,” Intel stated. Pricing will vary depending on the license model. On Demand currently applies to the following features: Intel Dynamic Load Balancer, Intel Data Streaming Accelerator, Intel In-Memory Analytics Accelerator, Intel Quick Assist Technology and Intel Software Guard Extensions. Note the Max series CPUs and the socket-scalable (-H tagged) SKUs do not have On Demand capability; nor does the 8-core single-socket part (3408U).

A version of this article first appeared on HPCwire.